College baseball: Georgia Southern sweeps No. 3 Georgia for the first time since 2015

STATESBORO, Ga. — Georgia Southern baseball completed the sweep of No. 3 Georgia on Wednesday evening, defeating the Bulldogs 6-1 inside J.I. Clements Stadium. The Eagles improved to 11-5, while the Bulldogs fell to 14-4.

Tyler Owens was on a controlled start and pitched three innings, allowing no runs and no hits, while striking out two. Owens improved to 2-0 on the season, while Garrett Brown falls to 1-2. Georgia Southern struck first in the second inning, when Christian Avant grounded out to shortstop to score Austin Thompson who collected the second triple of the season for the Eagles.

Austin Thompson continued the scoring in the second, singling to left field and scoring Steven Curry from third. In the fourth the Eagles exploded for four runs, as Jason Swan doubled to the gap in left center to add to the lead. Georgia Southern added three more runs in the frame to take a 6-0 lead.

In the fifth the Eagles scoreless streak of 35 and 2/3 innings was snapped, as Riley King flew out to left field and scored the first UGA run on a sacrifice fly.

BOTTOM 2nd | GS 1 – UGA 0 | Christian Avant grounded out to shortstop scoring in the first run of the ballgame.
BOTTOM 3rd | GS 2 – UGA 0 | Austin Thompson singled to left field scoring Steven Curry from third base.
BOTTOM 4th | GS 6 – UGA 0 | Jason Swan doubled to the gap in left center to score Noah Searcy. Later in the inning, Blake Evans singled through the left side and Swan scored. Parker Biederer later scored on a wild pitch. Mason McWhorter singled down the line in left to score Evans from third.
TOP 5th | GS 6 – UGA 1 | Riley King flew out to left field and scored the first run for the Bulldogs on the sacrifice fly.

COLLEGE BASEBALL RANKINGS: Which team could take over Georgia’s No. 3 spot?

Georgia Southern’s 35 2/3 innings of scoreless baseball came to an end on Wednesday in the fifth inning. The 3,286 people in attendance was the second most in GS history behind the February 25, 2017, game against Georgia. Wednesday night’s sweep was the first sweep over Georgia since 2015. Austin Thompson went 2-for-4 tonight driving in a run and scoring the opening run of the ballgame.

Georgia Southern will host Troy this weekend for the first Sun Belt conference series of the season. First pitch on Friday will be 6:30 p.m. from J.I. Clements Stadium. 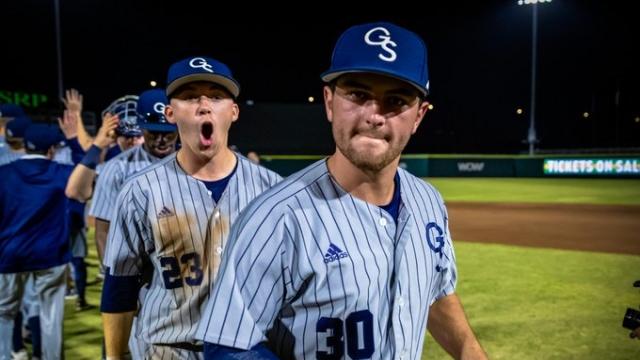 Here are the schools with the most all-time FCS football championships.