Colleges with the most players in the 2020 MLB playoffs 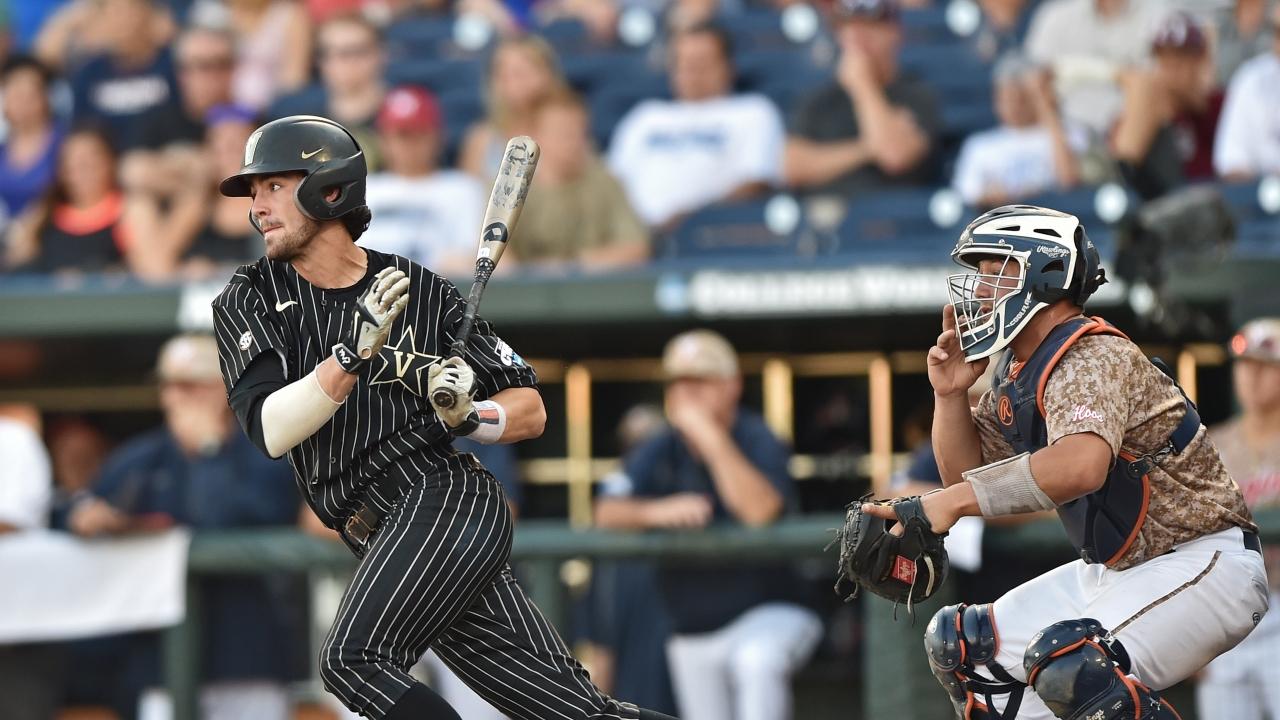 Sixteen teams vie for the 2020 World Series, following a truncated 60-game MLB regular season. The postseason gets started with the Wild Card Series beginning Sept. 29. The World Series is scheduled for Oct. 20-Oct. 28, if necessary.

Overall, 296 former NCAA baseball players, 157 different NCAA schools, 28 DI conferences and all three divisions are represented on this year’s playoff teams. Below is a full breakdown of the colleges and conferences with the most players participating in the 2020 MLB postseason.

Note: This includes all players listed on each team’s official MLB.com 40-man roster, who are eligible for the 28-man active roster that will be determined before each round of the playoffs.

Colleges with the most players in the 2020 MLB playoffs

Conferences with the most players in the 2020 MLB playoffs

BORN WINNERS: Here are the players that have won both an MLB and College World Series title

Astros third baseman Alex Bregman, a two-time All-Star and the 2019 AL MVP runner-up, wrapped up his LSU career (2013-15) with 56 doubles (eighth in program history) and a .337 career batting average. The Tigers made the College World Series his freshman and junior years.

UConn product George Springer, MVP of the 2017 World Series, was a two-time All-Big East first team selection and the 2011 Big East Player of the Year. He became the Huskies’ highest-drafted player in program history when he was taken 11th overall in the 2011 MLB Draft.

Athletics shortstop Marcus Semien finished third in AL MVP voting in 2019 and had seven homers in 53 games this season. He broke out as a sophomore at Cal in 2010, when he batted .328 with 17 doubles and 34 RBIs.

Left-hander Sean Manaea is third on Indiana State’s all-time strikeouts list with 290 in his three-year career. As a junior in 2013, Manaea posted a school-record 1.47 ERA and averaged 11.4 strikeouts per nine innings.

Rookie Thomas Hatch was a reliable arm in the Blue Jays’ bullpen this year, posting a 2.73 ERA with 23 strikeouts in 26.1 innings. Hatch led Oklahoma State to the 2016 CWS as a starter, finishing his redshirt sophomore season 9-3 with a 2.14 ERA.

Shane Bieber will likely win this year’s AL Cy Young Award after locking down the pitching Triple Crown with a league-best eight wins, 1.63 ERA and 122 strikeouts. He was just as good in college, ranking third in wins (23), fifth in ERA (2.73) and second in strikeouts (237) in UCSB history. He led the Gauchos to the 2016 CWS, racking up 18 strikeouts in three spectacular postseason starts.

Outfielder Tyler Naquin was the 2011 Big 12 Player of the Year for Texas A&M after leading the NCAA in hits with 104. He went on a 27-game hit streak that season, one game shy of the program record.

Former Maryland Terrapin Brandon Lowe was the top hitter for the top seed in the American League. Lowe was named to the All-ACC third team as a redshirt freshman at Maryland in 2014 with a team-best .348 batting average and .464 on-base percentage. He had no drop-off in 2015, batting .331 with nine homers, 18 doubles and 53 RBIs.

Oliver Drake is the only player in the 2020 MLB postseason to come out of the Naval Academy. Drake won nine games with a 3.46 ERA in two seasons for Navy before becoming a 43rd round draft pick in 2008.

Slugger Josh Donaldson, another first-year Twin, split time at catcher and third base for Auburn from 2005-07. Donaldson finished his Auburn career with 28 home runs, including 11 his junior year to go along with 17 stolen bases.

Garrett Crochet has the distinction of being the first player from the 2020 MLB Draft to appear in the Majors — and the first MLB player to skip the minor leagues since 2010. The lefty fireballer only made his debut on Sept. 18 but still finished second in the Majors this year with 45 pitches reaching 100 miles per hour. Crochet was drafted in the first round this past June out of Tennessee, where he struck out 140 batters in 132 innings in three years.

White Sox starting catcher Yasmani Grandal was a standout at Miami from 2008-10. He closed out his Hurricanes career batting .401 with 15 homers in 2010, en route to being named ACC Player of the Year and a Golden Spikes finalist (won by Bryce Harper).

The Yankees were the first team since 1959 to have a pair of teammates lead the majors in batting average and home runs (DJ LeMahieu and Luke Voit) at the end of the regular season. LeMahieu was the lead-off hitter on LSU’s 2009 national championship squad. He hit .444 in Omaha and was named to the CWS all-tournament team. Voit was a four-year contributor at Missouri State (2010-13). In his final two years, he hit eight homers and drove in 76 runs.

Gerrit Cole left UCLA (2009-11) with the second-most strikeouts in program history with 376. He led the Bruins to the 2010 CWS, where he had a 13-strikeout outing against TCU.

The Braves have three of Vanderbilt’s eight representatives in this year’s playoff field, including former first-round draft picks Dansby Swanson (No. 1, 2015) and Kyle Wright (No. 5, 2017). Swanson was selected first overall by the Diamondbacks after helping the Commodores reach consecutive CWS finals appearances. He was named CWS Most Outstanding Player for the 2014 national champions.

Adam Duvall caught fire this September, bashing 11 home runs in a single month for the NL East champs. In college, Duvall had stops at Western Kentucky, Chipola JC and Louisville. In his first season with Louisville in 2009, he had 11 home runs and 51 RBIs in 65 games.

TOP PICKS IN OMAHA: Here is every No. 1 MLB Draft pick to play in that year’s CWS

Corbin Burnes had a breakout 2020 season, emerging as a Cy Young contender with a 2.11 ERA in nine starts, before straining his oblique in the last week of the regular season. The former St. Mary’s Gael was a 2016 All-WCC first-teamer and pitched six complete games over his final two seasons (2015-16).

Keston Hiura was the NCAA batting champ in 2017, hitting .442 with a .567 on-base percentage for UC Irvine. His offensive prowess earned him Golden Spikes Award semifinalist honors.

Six-time All-Star first baseman Paul Goldschmidt owns the Texas State career records with 36 home runs and 170 RBIs, doing so from 2007-09. Goldschmidt was the Southland Player of the Year and a third-team All-American as a junior.

Harrison Bader is one of seven Florida Gators in the postseason. The speedy outfielder was named to the 2015 CWS all-tournament team and is one of 11 Gators to reach 20 home runs, 100 RBIs and 30 steals in his career, according to Florida Athletics.

Before Kris Bryant broke through as 2015 NL Rookie of the Year and 2016 NL MVP, he was a three-year star at San Diego. In his 2013 junior season, Bryant crushed an NCAA-best 31 home runs and took home both the Golden Spikes Award and Dick Howser Trophy for best player in the nation.

Nico Hoerner made the All-Pac-12 team in back-to-back seasons as part of Stanford’s middle infield. Hoerner hit .345 and scored 45 runs as a junior in 2018, leading to his selection at No. 24 overall in that year’s MLB Draft.

Former Louisville Cardinal Will Smith has blossomed into one of the top offensive catchers in his second year with the Los Angeles Dodgers. Smith slashed .291/.392/.410 in his three years at Louisville and was named to the 2016 All-ACC third team and Louisville Regional all-tournament team.

Reliever Blake Treinen transferred from Arkansas, where he was denied a walk-on opportunity, to South Dakota State where he played from 2010-11. He started 13 games for SDSU as a senior, going 7-3 with a 3.00 ERA and two complete games.

Jon Berti’s name is prominent throughout Bowling Green’s record book. He owns BGSU’s single-season record for hits (93) and is tied for first in single-season triples (six — done twice), third in stolen bases (29) and tied for fifth in runs (62).

Southpaw reliever Drew Pomeranz was the SEC Pitcher of the Year and a Golden Spikes Award finalist in 2010 for Mississippi. Pomeranz ended his Ole Miss career with 21 wins, including a memorable complete-game victory over Western Kentucky to send the Rebels to the 2009 Super Regionals.

NL Rookie of the Year candidate Jake Cronenworth was a two-way star for Michigan (2013-15), leaving the Wolverines tied for 13th in career hits and second in saves in school history.

Trevor Bauer could add a 2020 Cy Young Award to his list of accolades, which already includes a 2011 Golden Spikes Award. He won the latter after a junior year at UCLA where he finished 13-2 with a 1.25 ERA, 10 complete games and a nation-best 203 strikeouts.

Relief pitcher Michael Lorenzen is one of eight former Cal State Fullerton Titans in the playoffs, tied with Vanderbilt for most representatives. Lorenzen was a 2013 Golden Spikes Award semifinalist and first-team All-American according to four different outlets. He served as CSU Fullerton’s starting center fielder and closer, finishing with 11 career home runs and 35 saves. He’s carried that two-way ability into the Majors, as he has seven home runs through his first six big-league seasons.